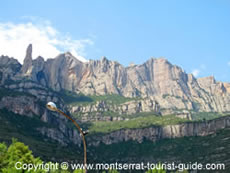 There are two organized tours that save you the time and trouble of organizing your own trip to Montserrat. They include return journey from Barcelona to Montserrat in an air conditioned bus. You can choose either a half day morning tour or half day afternoon tour.

Montserrat Mountain is 10 kilometres long and 5 kilometres wide. It has a perimeter of nearly 25 kilometres. The surface area is nearly 45 km2. The mountain gives the appearance of being higher than it actually is, due to the fact that it rises straight up from the Llobregat River. There are no other mountains in its vicinity that come close to its height - making it look very distinctive in this part of Catalunya.

The word Montserrat actually means 'serrated mountain' - and when you see the mountain in the flesh, you will know exactly what is meant by this. It has the appearance of being very jagged and forms distinct peaks.

The mountain's geological origins are sedimentary. What is today the base of the mountain was, at the end of the Mesozoic era, the delta of a river that came from the Balearic continent. It flowed into a large lake in the centre of Catalonia. At the bottom of the lake, sediments could be found. When the Balearic continent submerged, what was left was a dry lake and an uncovered delta - a mass of conglomerates.

The mass was vulnerable to the elements. So, over the next ten million years movements in the Earth's crust, changes in climate and erosion formed the mass into the shape that we see today.

The rocks of Montserrat consist of a conglomerate of hardened and eroded rocks and limestone. This makes them hardy in comparison to other mountains in Catalunya and able to withstand erosion.

The climate of Montserrat is unique - it is damp and Mediterranean (subtropical - hot in the summer and mild in the winter). The very defined points in the mountain mean that there can be large contrasts in climates over small distances. These are known as micro-climates.

At Montserrat Monastery there is a weather station located at 740m altitude. The weather station has found that there is an average yearly rainfall of 678 l/m2. The average yearly temperature is between 14 and 16 degrees Celsius. Also, the sea winds mean that there can often be a thick fog over the mountain. This thick fog provides a useful humidity for the growth of plants (for more information on the plant life on Montserrat Mountain, see our Guide to Montserrat Natural Park).

Snow on Montserrat is rare, but from time to time there will be a considerable amount of snowfall.

The relationship between Montserrat Mountain and Man

One of Montserrat's peaks - the peak of Montgrós - was first climbed in 1880. Following this initial climb, more paths in the mountain were created.

Climbing has also gained importance in the mountain over the years (for details on climbing possibilities at the mountain, see our Guide to Climbing Montserrat Mountain). In 1922 the Peak of Echoes was climbed. Following this, other peaks were climbed, such as the Cavall Bernat Peak in 1935, the St Jerome's Wall in 1948 and the Devils Wall in 1955.

Man has also built a relationship with the mountain by inhabiting its caves. During prehistoric times several of the mountain's caves were inhabited. The two caves that have proved to be of the most interest are Cova Gran and Cova Freda - both on the South East side of the mountain. Information regarding the exploration of the caves was published in 1925, and it was discovered that they had been the sites of Neolithic pottery.

St Jerome is the name for the highest peak of Montserrat Mountain. On leaving the Funicular de Sant Joan you can take a look at rock formations around the peak Each different rock has been given a name that relates to its distinct shape. Names for the rocks include: The Little Mummy, The Mummy, The Cat and The Elephant. 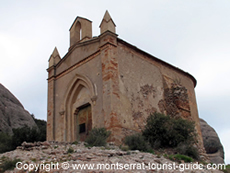 A Hermitage at St Jerome

Montserrat Mountain is a thing of beauty - its unique rock formations are cause for interest amongst geologists all over the world. Whilst you are at Montserrat, take a look around at the natural surroundings - whether you are a nature enthusiast or not you are sure to gain something from the experience.

Back To The Top Of The Page

Enjoy the best of Montserrat with an organized coach tour from Barcelona. No working out train routes, timetables and trying to buy tickets in Spanish.

Make sure you see all the important attractions at Montserrat and learn about the history with a qualified guide.

Select from 24 different tours to Monsterrat and find the tour which is best for you.